The de-radicalization, rehabilitation, and reintegration of so-called repentant Boko Haram terrorists have emerged as one of the centerpieces of the Buhari regime’s governance, which is not surprising given that Buhari had said in the past that government-sanctioned retaliatory aggression against Boko Haram terrorists was an attack on the North.

Every sober observer knows that de-radicalizing, rehab-ilitating, and reintegrating remorselessly bloodstained mass murderers into the very societies they drowned in oceans of blood especially without compensating and mollifying the people they displaced, widowed, and orphaned is a singularly wooden-headed policy.

But it helps, nonetheless, to look at evidence from research and from the experiential data of societies that attempted to de-radicalize terrorists. Since Nigeria isn’t the only country that grapples with the question of what to do with and to nabbed terrorists, what can we learn from other countries?

The UK has a program that it calls “Desistance and Disengagement Programme,” which works to de-radicalize terrorists. The US state of Minnesota, which has a large number of Somali immigrants and a fair amount of domestic terrorism, also has a “Terrorism Disengagement and Deradicalization Program” designed to jolt terrorists back from the precipice of fatal extremism.So do many countries in Europe and Asia.

The data from the UK is mixed, but it nevertheless provides a cautionary tale for Nigeria. For example, three past beneficiaries of the country’s “Desistance and Disengagement Programme” went on to murder 24 people between 2017 and 2019 in the aftermath of their “deradicalization.” Other countries have similar experiences.

Deradicalization of terrorists is not always a failure, of course. According to the Business Insider, “Between 2001-2012, Malaysia put 154 extremists through deradicalization schemes.Of those,148 had ‘successfully completed the de-radicalisation programme and were released, without later re-offending,’ the International Centre for the Study of Radicalisation and Political Violence (ICSR) wrote in a 2012 paper.”

However, an emerging consensus is that because terrorists are often animated by a single-minded, tunnel vision of society, it is often impossible to be certain that a deradicalization program can reverse their predilection for violence.A 2019 research by the European Union’s Radicalization Awareness Network, concluded that, “Even after the very best of prevention efforts, some individuals still go on to become (violent) extremists.”

The Center for Research and Evidence on Security Threats (CREST) also said there is “limited evidence about what supports positive change, which makes it difficult to determine if an intervention’s approach is likely to be successful.”

Similarly, the UK’s Christopher Dean, a psychologist who created a deradicalization program called the Healthy Identity Intervention (HII), admitted that it’s difficult to be certain that a terrorist has been completely deradicalized “People can get more reassured and confident about change and progress that people are making, but I think we have to be very careful about saying someone has totally changed or has been cured,” the Independent of the UK quoted him as saying.
I don’t know how Nigeria’s Boko Haram terrorists are being deradicalized and rehabilitated & I hope someone will systematically study this but the result of their work stares us in the face. Many of the so-called deradicalized and reintegrated Boko Haram terrorists actually only reintegrate to their former terror cells from where they murder soldiers and civilians alike. 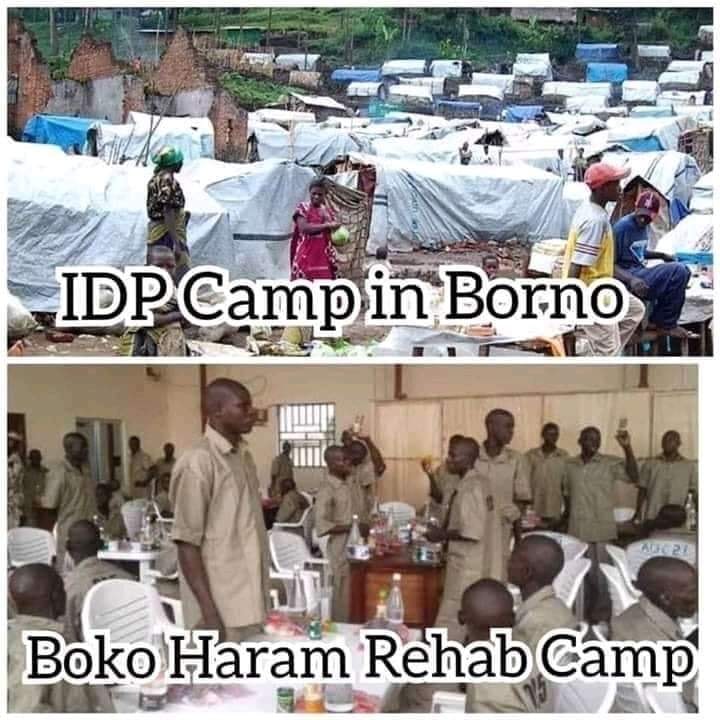 On July 26, for example, a soldier fighting Boko Haram in Borno sent the following social media message that tugged at my heart strings: “Good evening sir. I’m presently in Monguno. I’ve been wanting to hint you on the recent happenings. During the last two attacks June and July (in Monguno), some of the so called rehabilitated Boko Haram guys- Non State Armed Groups (NSAG) joined their former colleagues in attacking the community and ran back to the BUSH with them. This is to say that the whole rehabitation [sic] narrative is a sham.”

Ali Ndume, who represents Borno South in the Senate, told ChannelsTV on July 30 that a recently “de-radicalized,” “rehabilitated,” and “reintegrated” Boko Haram terrorist murdered his father, stole his father’s cows, and vanished.

“Some of them that returned to Damboa, after two, three days, they disappeared,” he said. “I learnt reliably that even in the course of de-radicalisation, they said they are not willing to come to live with the infidels. This programme really needs to be looked into immediately. I am gathering information and position of my people and even go legal.”

Ndume’s observation has support in research. A German researcher by the name of Daniel Koehler who studied German neo-Nazis & terrorists inspired by religion found that, “The solitary problem for these individuals is always that there’s a global conspiracy against their race or religion; the solitary solution to such persecution is violence, with the goal of placing themselves and their group in control of a revamped society.”

They are not persuaded by moral or theological arguments, he said. He makes the case for “the careful reintroduction of problems and solutions into a radicalized person’s life, so that they can no longer devote all their mental energy to stewing over their paranoia.” 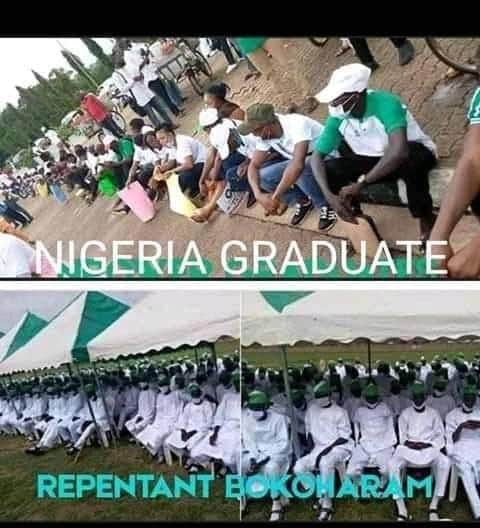 Plus, people in the communities that the Nigerian government is reintegrating Boko Haram terrorists to don’t want these washed-up terrorists in their midst. Don’t the people’s opinions and preferences matter? TheCable of July 24 reported Borno residents to have told the government to integrate the terrorists back “to govt house or Aso Rock” instead of their communities.

The anger of the communities is understandable. While government is “reintegrating” the vile terrorists, it is disintegrating the victims of the terrorists.While these villainous Boko Haram terrorists are pampered, the surviving victims of Boko Haram’s murderous barbarism endure precarious existence in filthy, dangerous Internally Displaced Persons (IDP) camps.It’s like they are being punished by the government for being victims of terrorists’ brutalities.

While Boko Haram terrorists are being treated with excessive indulgence, their victims in IDP camps are serially raped—both figuratively and literally. Babachir David Lawal stole millions from them, and he is still walking free. Umar Farouq Sadiya stole date palms (worth millions of naira) donated to them by Saudi Arabia. She has been rewarded with appointment as minister of Humanitarian Affairs, Disaster Management and Social Development. The cruel irony!

According to the UN Office for the Coordination of Humanitarian Affairs (OCHA), women in IDP camps in the Northeast “resort to transactional sex for survival.” Because of the unsanitary conditions of the IDPs, there are periodic outbreaks of cholera that kill scores of people. Plus, even in their state of helplessness, they are still subject to episodic Boko Haram murders.

When a Nigerian Airforce jet bombed an IDP camp in Rann, Borno State, on January 17, 2017 in error, which caused the death of at least 115 people, Buhari didn’t find it worth his while to console them, much less visit them. About three months later, on March 22, 2017, Boko Haram bombed another IDP camp in the Muna Garage area of Maiduguri. Again, there was insouciant silence from the same government that is bending over backwards to please Boko Haram terrorists.

Obviously, the Buhari regime rewards and celebrates homicidal outlaws. Its message to Nigerians is unmistakably this: if they want to be taken seriously and indulged by government, they should be organized, vicious mass murderers.